Eight Added to Alabama Business Hall of Fame for 2022 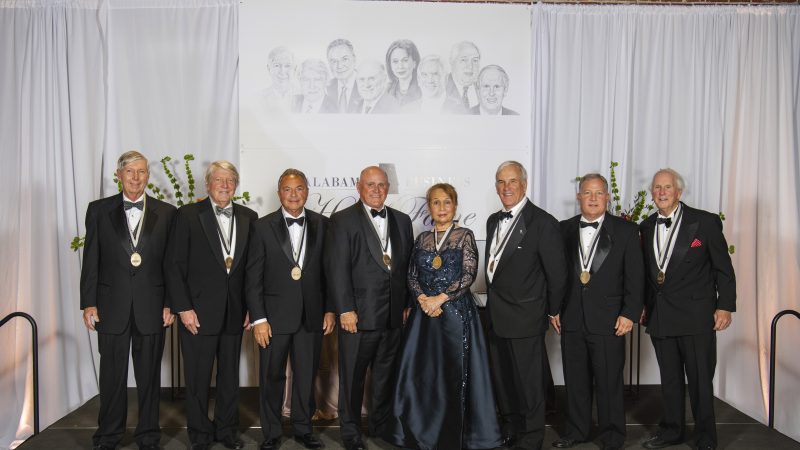 Eight Added to Alabama Business Hall of Fame for 2022

TUSCALOOSA, Ala. — The Alabama Business Hall of Fame inducted eight new members for 2022 in a black-tie ceremony on November 10 at Haven in downtown Birmingham attended by over 600 individuals.

The inductees for 2022 included:

Mr. Walter Batson, Jr. of Huntsville: Co-founder and Chairman of the Board of InterFuze Corporation, a Huntsville-based firm offering professional and technological products and services to the federal government. Mr. Batson attended The University of Alabama, where he earned bachelor’s degrees in statistics and accounting, and a master’s in operations research.

Mr. Ronald G. Bruno of Vestavia Hills: Co-founder and Partner at Bruno Event Team, one of the largest dedicated sports event management companies in the country. He earned his bachelor’s in marketing from The University of Alabama.

Mr. Grayson Hall of Birmingham: Retired CEO of Regions Bank. His leadership and vision helped the bank emerge stronger from the Great Recession. He attended Sewanee: The University of the South and graduated with a bachelor’s in economics, then The University of Alabama, where he earned an MBA.

Secretary Alexis M. Herman of Washington, D.C.: Chair and CEO of New Ventures, LLC, a risk management company. Born in Mobile, Mrs. Herman earned her bachelor’s of sociology at Xavier University. She was the first African-American woman to serve as Assistant to the President under Bill Clinton, and Director of the White House Office of Public Liaison, and was later the first African-American to ever serve as Secretary of the Department of Labor.

Mr. Michael Mouron of Birmingham: Retired Chairman of Capstone Development Corp, a real estate development company that created a new model for college campus housing. A native of Birmingham, Mr. Mouron earned his bachelor’s of accounting from The University of Alabama.

Mr. William S. Propst, Sr. of Huntsville: Started and led Qualitest Pharmaceuticals, which was one of the largest generic drug manufacturers in the country. Born in Walkers Chapel, Alabama, Mr. Propst earned his bachelor’s of pharmacy at Samford University.

Mr. C. Kemmons Wilson, Jr. of Memphis, TN: Principal and Vice Chairman of the Board of Directors of Kemmons Wilson Companies, a family-owned organization with diverse business interests. Mr. Wilson, who goes by “Kem,” earned his bachelor’s of business administration at The University of Alabama, and studied business at the Harvard Graduate School of Business.

The award of inductee Mr. William S. Propst, Sr., who passed away in 2019 was accepted by his widow, Eloise Propst, and son, Bill Propst Jr.

Mike Ross, the Chairman of the Hall of Fame Board welcomed attendees to the event and provided the invocation. Dr. Kay M. Palan, dean of the Culverhouse College of Business, introduced each inductee to the stage.

Dean Palan noted that while all the inductees have made lasting impacts in business, they also give back in the form of service to their communities, offering leadership on boards, or making gifts that help lift up others.

A number of former inductees from over the years also attended the event.

Founded in 1973 by the Board of Visitors of the Culverhouse College of Business at The University of Alabama, the Alabama Business Hall of Fame honors, preserves and perpetuates the names and outstanding accomplishments of business personalities who have brought lasting fame to the State of Alabama, whether it occurred in Alabama or not.

All inductees are heavily committed to their communities, serving in leadership roles on boards, donating their time and resources to causes, and inspiring future generations of business leaders.

Now in its 48th year, the Alabama Business Hall of Fame is in Hewson Hall on The University of Alabama campus.

Members of UA’s Culverhouse College of Business staff and a board representing the Culverhouse Board of Visitors, former inductees, other Alabama institutions of higher education, and Alabama businesses, coordinate the Hall of Fame selection process and planning of the induction ceremony.