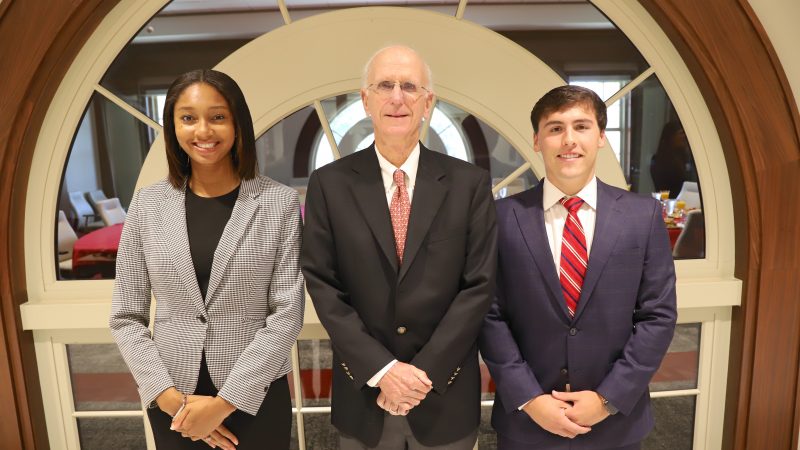 Richard Anthony knew from the time he was in junior high school in Andalusia, Alabama that he wanted to be a banker. After all, it ran in the family: both of his grandfathers worked in different banks in Troy and Andalusia, and his father was a banker as well. This family exposure led to confidence in his chosen career. He graduated from The University of Alabama in 1968 with a degree in finance and continued his education at University of Virginia, graduating with an MBA in 1971.

He began his banking career in 1971 with AmSouth Bank, gaining responsibilities and experience over the next 14 years. In 1985, he left AmSouth to co-found First Commercial Bancshares, which grew quickly into over $1 billion in assets.

In 1992, First Commercial Bancshares merged with Synovus. As Synovus expanded into new Southeastern markets, Anthony’s leadership helped guide the expansion. He was named Chief Executive Officer in 2005, and he retired as Chairman in 2012.

To honor his legacy, two members of the Synovus board of directors approached the company about creating a scholarship at Culverhouse. The scholarship will award $10,000 each to a deserving male and female finance student each spring, with the expectation that it will support four students when the endowment is fully funded. The business school hosted a luncheon in Anthony’s honor on September 30th, attended by, among others, the first scholarship recipients, Sam Guerrero and Danielle Spencer (pictured with Anthony), as well as Synovus CEO Kevin Blair and Culverhouse Dean Kay Palan. Afterwards, Anthony spoke to a group of Culverhouse honors students.

“Banking,” Anthony explained in an interview, “is about many things, certainly numbers and people.” Rather than a mere lender of money, he sees a good banker as a “consultative partner,” one that would “take a seat at the table when the trusted advisors are gathered—the attorney, the accountant, the management consultant.” In fact, a banker can even add value by saying “no,” in the right way, and keeping a client out of an excessive financial risk situation. This philosophy led Anthony to embrace “servant leadership,” whereby the leader gives team members the tools and support they need to excel. This concept is so important to his legacy that as part of the application process for the scholarship, students are asked to compose an essay about what servant leadership means to them.

While he does not hide his hope that some scholarship recipients will go on to work with Synovus, Anthony wishes for them to simply be successful, and to do it in an “ethical manner,” because “ethics and ethical behavior is non-negotiable.” Beyond that, there are “different ways to measure success.” Anthony would love to see the scholarship recipients contribute to their community and their state in ways other than having wealth and a high-earning business. Ultimately, Anthony wishes for them to maintain the dignity of the banking profession into the future. “Banks do a lot of good for their communities,” he said. “I’ve always appreciated and admired that. It’s a fulfilling experience to be a banker because you’re tied into the fabric of the community.”