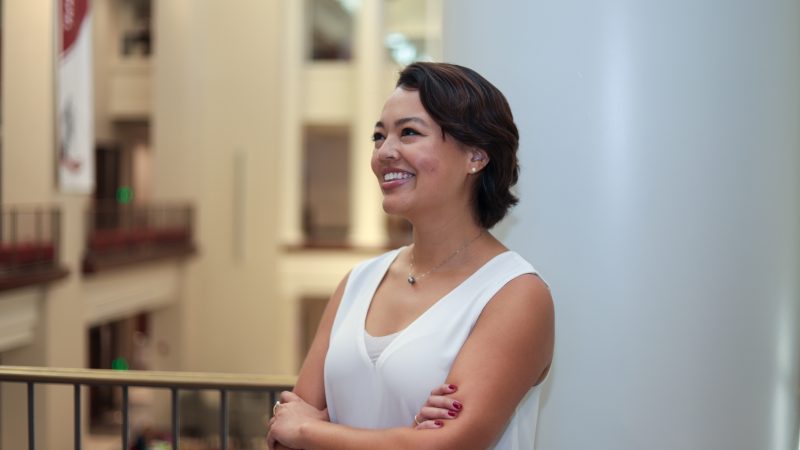 Manderson MBA student Lizzie Choy’s involvement with Arc of Central Alabama started at a Birmingham Barons game, where she was almost brained by a stray foul ball.

That near-catastrophe drew the attention of an old high school friend who told her about Arc, which is an organization that serves people with physical and intellectual disabilities, mainly adults. Choy served on the junior board from 2018 until last spring.

A Birmingham native, Choy attended Rhodes College in Memphis and was initially drawn to business, but was scared off by her first accounting course. Instead, she threw herself into liberal arts studies, eventually taking a Bachelor’s in Urban Studies in 2017, but she retained her business minor. She did her senior seminar research project on the importance of St. Jude Children’s Research Hospital to the city of Memphis, and she noted a lot of similarities between Memphis and her native Birmingham.

After college, Choy returned to Birmingham and worked as a development coordinator for the Vulcan Park & Museum, writing grants, pursuing sponsorships, and leading fundraising efforts. During this time she considered law school, in the footsteps of her attorney parents, and went on to work in two Birmingham law firms: Grant & Eisenhofer, PA as legal assistant from 2019-2021, and Dicello, Levitt & Gutzler, LLC as a paralegal and legal assistant in 2021.

But the law was not for her. What was next? She decided to go for the MBA at Manderson, to “learn the stuff that used to scare me.”

When Choy first got to Launch at Manderson, having graduated from a small liberal arts college, she was afraid that she would be an anonymous face in large classes. However, she was pleasantly surprised to find that her cohort was small group, which feels familiar. The whole MBA experience, she admits, was a little scary at first—she felt some imposter syndrome. But then she reminded herself that she was here, which meant that Manderson saw something in her.

“I’m exactly where I need to be,” she said. “I don’t need to limit myself to things that feel safe. It’s ok to take risks. Manderson is a place that will allow me to take risks, and fail if I need to. But there are people around me to lift me up and help remind me that I’m here for a reason, and I’m going to do great things.”