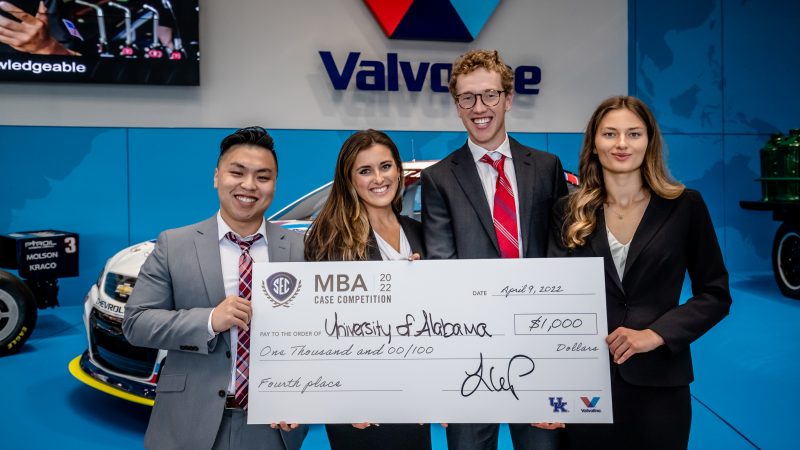 The Manderson Case Team took home fourth place in the Ninth Annual SEC MBA Case Competition, hosted by the Gatton College of Business and Economics at the University of Kentucky. This is the third year in a row the Manderson team made the SEC finals. Manderson was represented by MBA students Trip Crowley, Peter Do, Mason Joyner, and Bri Pniak, advised by director of experiential learning, Quoc Hoang.

Held  April 7-9 in Lexington, the competition began on Thursday evening by randomly dividing each SEC team into four divisions. On Friday morning, Valvoline CEO Sam Mitchell welcomed participants, and Leslie Noel, Director of Consumer Service, presented the teams with a real-life challenge. The teams had 24 hours to develop recommendations to advance Valvoline’s strategy and create a corresponding presentation.

Once Valvoline was announced as the case sponsor in March, the team began preparing, forming a unique bond while getting to know each other’s personalities and working styles leading up to the competition.

“The weeks leading up to the big day were interesting as we had to really put our heads together to think of every possibility,” said Do, a second-year MBA student. “All in all, it was a great experience, and my team and I prepared the best we could. I wouldn’t change a thing.”

After last year’s virtual competition, the Manderson team was excited about the opportunity to travel to Lexington for this year’s competition. Crowley, a second-year MBA student, touched on his experience after two years of competing in virtual competitions, including representing Manderson at the 2021 Katz Invitational Case Competition this past fall.

“It was my first in-person competition, and it was exciting to come from behind the Zoom screen to compete against the teams from the other schools. Even after 24 hours+ without sleep, we did a great job with the presentation and answering questions,” Crowley said.

In addition to advancing to the finals and earning fourth place, team member Mason Joyner won best presenter for their division.

“I surprised myself this year. Being around so many intelligent Case Team students has fostered new thinking and confidence in myself. It’s been a great year, and this was a great way to end it,” said Joyner, STEM Path to MBA student.

Pniak, STEM Path to the MBA student, echoed the impact her Case Team experience has had on her after competing in three competitions this year.

“An MBA is so much about what you make of it. Case Team was a catalyst for learning and growth, allowing me to put both soft and hard skills into actual practical use. It’s been such a privilege and honor to be a part of this team.”

Manderson Case Team is a signature learning experience that showcases the high caliber of students within Manderson’s MBA program. Reaching the finals of the SEC MBA case competition for the third year in a row caps off another successful competition year that also included scholarship wins at Denver University’s Race & Case and Florida Southern College’s MBA Case Competition.

“In the last two years, we have mainly competed virtually, so I didn’t know how this team would make the transition to in-person with a live panel of executives. Despite the time pressure, I’m proud of how this team came together, supported each other, and represented The University of Alabama,” said Hoang.