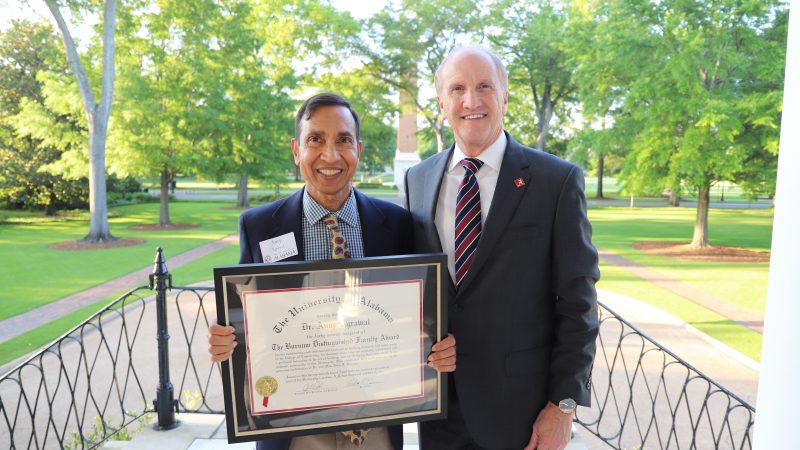 Dr. Anup Agrawal, professor and William A. Powell Jr. Chair of Finance and Banking with The University of Alabama Culverhouse College of Business, is the recipient of the 2021 Burnum Distinguished Faculty Award.

Agrawal provided a special lecture during a ceremony April 27 at 4 p.m. in 0002 Hewson Hall and was presented his award during a reception in 2017 Hewson Hall following the presentation. The lecture and reception were both open to the public.

Agrawal joined the UA faculty in 1999. His research focuses on topics in corporate finance and investments, including corporate governance, mergers and acquisitions, executive compensation and behavioral corporate finance, among others. He has presented his work at seminars and conferences around the world and his research has been cited more than 19,000 times in academic papers.

The author of 40 published papers, Agrawal has had his work published in the top journals in finance, economics, accounting, law and management. His research has also been featured in Business Week, Wall Street Journal, and Financial Times, among others.

Agrawal’s Burnum lecture was titled, “Two Sides of Hedge Fund Activism.” According to Agrawal, a large body of academic research in finance finds that despite a great deal of resources spent over many decades on shareholder activism — i.e., efforts to nudge or push managers to take shareholder-friendly actions — by large institutional investors like pension funds, such efforts have produced few tangible benefits for shareholders or firms.

Awarded annually to recognize and promote excellence in research, scholarship and teaching, the Burnum Award recognizes distinguished careers at UA. The Burnum Award Committee, comprised of former winners, screens nominees and forwards two nominees to the president, who selects the winner.