Satellite Made By UA Students Ready for Launch 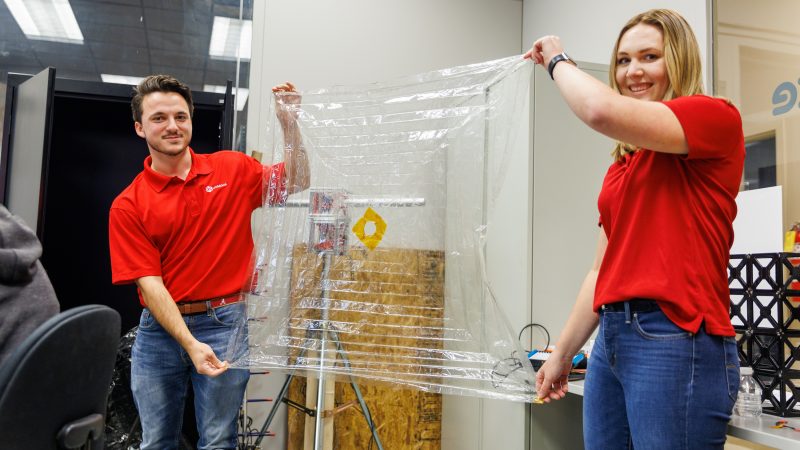 Satellite Made By UA Students Ready for Launch

This story was originally written by Adam Jones of UA’s Strategic Communications.

For the past three years, students at The University of Alabama have worked on a project that is grabbing the attention of the whole world.

If everything goes as planned, in January a small satellite made by the students will be included in a rocket launch from Cape Canaveral Space Force Station in Florida. Already announced by NASA, the rocket launch and orbit of the satellite has been coordinated internationally and will be watched and monitored by governments, industry and amateur enthusiasts the world over.

“It’s weird to think that at some level there are international implications to what we’re doing,” said Ian Noonan, a senior in aerospace engineering from Columbus, Ohio.

UA’s satellite will be one of five small satellites aboard a rocket from the company Astra. The launch will be the culmination of a years-long process for the UA students that has included representation from several disciplines across engineering, the sciences and business.

“We are really proud of our students,” said Dr. Rohan Sood, a team advisor and assistant professor of aerospace engineering and mechanics “They put together a spacecraft from scratch, taking their designs and materials and turning them into a fully functional spacecraft that is about to launch.”

The UA project is one of 18 small research satellites — called CubeSats — from 11 states selected by NASA in 2020 to fly as auxiliary payloads aboard rockets launching in 2021, 2022 and 2023. Educational institutions, nonprofit organizations and NASA centers proposed the selected missions in response to NASA’s CubeSat Launch Initiative

The nearly 50 students who have been part of the team, UASPACE, aim to demonstrate an emerging technology to bring satellites out of orbit quicker. The UA CubeSat, called BAMA-1, will fly in a Low Earth Orbit and eventually fall back to Earth and disintegrate in the atmosphere, but first it plans to deploy a drag sail that should slow the CubeSat using the remnants of Earth’s atmosphere present in a Low Earth Orbit to reliably and rapidly deorbit.

The UA students hope this novel demonstration of a drag sail will be part of efforts to address the growing concern of space debris and defunct satellites. Currently, there is no international enforcement of when and how to bring down satellites. Most swirl around the Earth long after their operational mission before eventually losing speed and burning up in the atmosphere or, to prevent collision with operational spacecraft, are sent to a graveyard orbit where they may remain for millions of years.

“It’s a really complex problem that involves a lot of different players, but I think people are starting to recognize that missions need to be designed with the end in mind and have ways to mitigate that,” said Abby Feeder, project manager for BAMA-1 who graduated in May 2021 with a bachelor’s in aerospace engineering and is earning a master’s in the discipline and an MBA at UA as part of the STEM PATH to MBA Program. “We want this to be a proof-of-concept that others can build on.”

While in operation, BAMA-1 will communicate with a ground station installed on campus by the students. The data collected will be used in possible future missions with the goal of devising predictive models of air density in Low Earth Orbit that should help the aerospace community plan future use of drag sail technology.

Noonan, president of UASPACE and also part of the STEM Path program, said the research demonstration of the drag sail was a major reason the UA team was selected for the NASA program and credits engineering faculty and industry partners in helping guide the team in making the proposal.

“From the get-go the goal was to get a University of Alabama satellite in space so even making it to orbit would be a huge accomplishment for this university,” he said.

Feeder, originally from Parker, Colorado, said the experience on the team has been invaluable as she prepares for a job with the United States Department of Defense after graduation in May 2022.

“Getting a project over the finish line, trying to get the pieces we need to come together, has been a really good learning experience because it prepares us for bigger projects that we’ll do in industry,” she said.

Along with Sood, Dr. John Baker, professor of aerospace engineering and mechanics, is a technical adviser for the team. The business team advisor is Michael Pope, instructor in the STEM Path program.