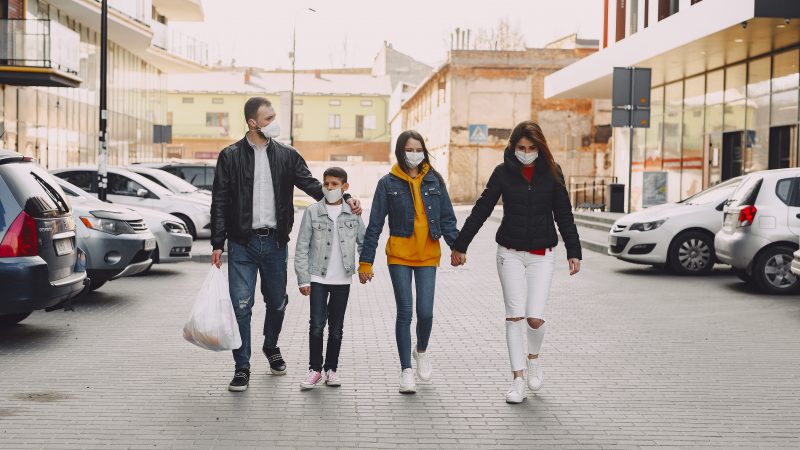 This commentary is authored by KC Conway, MAI, CRE, CCIM, director of research at Culverhouse’s Alabama Center for Real Estate, or ACRE. It originally appeared in the July 15, 2020 issue of ACRE’s Wednesday Insights newsletter. To subscribe to future editions, go here.

This week is April 15th in COVID-19 time (tax filing deadline on July 15th) and this is the first week of Q2 corporate earnings season. On the heels of last week’s WIN titled Preparing for Q2 Earnings, the question top-of-mind after the first money-center banks (JPM, Citi and Goldman), largest regional banks (Wells Fargo, PNC and US Bank), and Delta Airlines reported Q2 earnings is what type/shape recession and recovery are we experiencing? The stock market seems to be locked and loaded on a “Nike Swoosh” shaped recovery with the S&P 500 up 7% YOY to 3,200 – and approximately flat YTD (-0.13%) after a low of 2,200 in March; however, the rapidly rising COVID-19 daily case count (exceeding 60,000 new cases per day in 1H-July),  and states slipping back to Phase-1 of the re-opening protocol, suggest something quite different than a “Nike Swoosh or “V”-shaped recovery. The consensus is increasingly for something more like a “W” or “U” shaped recession/recovery by those in the real economy and disconnected from Wall Street. This economist has been in the camp of a “W”-shaped recession since the get-go. Why? From a common-sense perspective, there is no way you shut down the global economy for 90+ days spiking unemployment above 20% due to a pandemic with no vaccine and then just recover over the next 90 to 180 days hoping the coronavirus just abates with summer weather. Prior to laying out the rationale behind a “W”-shaped recession/recovery, a good starting point is first a recap of the history of recessions in the U.S. and then an understanding of the respective recession options.

The National Bureau of Economic Research (NBER) is the organization authorized by the U.S. Congress to date U.S. business cycles. Conventional protocol by the NBER has been that the U.S. is in recession when the economy suffers two consecutive quarters of shrinking gross domestic product (GDP). We have incurred just one-such quarter and won’t know until the end of July the “Advanced Estimate” for Q2 GDP (widely expected to be negative with range estimates from a low of -10% to -30%). However, for the first time in its history, the NBER has declared the U.S. is in recession with just one-quarter of GDP decline (Q1 at -5%). So why did the NBER make the early call in June 2020 that the U.S. entered a recession in February? The answer is that is sees nothing to suggest a “V”-shaped recovery in Q2 or Q3. The NBER foresees a continued decline in activity spread across several sectors and sustained for several months that includes unprecedented job losses, declining factory output, shrinking personal incomes, and a collapse in consumer spending. And, the World Bank agrees from a global perspective. The bank expects the global economy to shrink 5.2% this year, making it one of the most severe downturns in the past 150 years. “Never before have so many countries entered a recession at the same time, even during the Great Depression of the 1930s or the downturns following the two world wars, notes the World Bank. The bank forecasts the U.S. economy to shrink 7.0% this year. Therefore, from a historical perspective, as well as views by both the NBER and World Bank, no “Nike swoosh” or “V”-shaped recession or recovery for the COVID-19 recession. 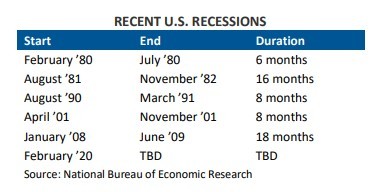 Description of the respective type recessions/recoveries:

U-shaped recessions are recessions that begin with a slightly slower decline but then remain at the bottom for an extended period of time before turning around and moving higher again. The recession from 1971 through 1978—when both unemployment and inflation were high for years—is considered a U-shaped recession.

A trail of breadcrumbs has been laid out by ACRE since March 2020 when it commenced its coverage of the coronavirus as what kind of recession was unfolding. This trail has consistently guided that this COVID-19 recession was quite severe and would yield economic measures that would rival any metric posted during the 2009 Great Recession. Whether it is unemployment spiking above 20% to double the level reached during the Great Recession, or the unprecedented decline in CRE transaction activity – punctuated by just 10 hotel transactions nationwide in May 2020 (according to Real Capital Analytics), the economic and CRE metrics have been consistent with a more severe recession/recovery. The near record rise in CMBS loan delinquency reported in June (10.32%) by TREPP to within 2 basis points of the 10.34% record level reached in 2012 three years after the onset of the 2009 recession – and now the unprecedented rise in LTSS (Loans Transferred to Special Servicers) that breached 16% for hotel loans and 9% for retail CRE in June 2020 – is another CRE credit metric suggesting this is something more than a “V”-shaped recession/recovery. The two contrarian participants in the economy giving credence to a “V”-shaped recession have been housing and the stock market. I cannot explain or justify record stock index levels with the backdrop of so many deteriorating real economy measures, but this past week I attempted to put housing in perspective with the Housing Quartile not doing so well during COVID-19 feature that highlighted how 23% of American households unable to pay their rent or mortgage is not a foundation for a healthy housing industry long-term. Not all housing quartiles are performing as the upper two that is influencing home sales and home price appreciation. The answer to why there is a “V” versus “W’ debate among many in our industry is Federal Reserve intervention. The monetary and fiscal support during the first 120+ days of the coronavirus is masking the severity of this pandemic. The Federal Reserve is buying assets that have never been eligible for its balance sheet – and which will likely incur losses. The Fed is essentially purchasing anything where there is not a market buyer, which in turn is masking true asset price discovery. Whether it is Treasury bonds, investment grade-corporate bonds including the likes of Apple, Berkshire Hathaway, WalMart, etc., or mortgages, student loans or ETFs, the Federal Reserve is the market.

The back slide into a “W” or double-dip recession will  not come until intervention measures – like those in the CARES Bill requiring companies to pay employees until September 2020 or FHFA loan and mortgage forbearance – wind down in fall 2020 and winter 2021. Early Q2 earnings are reaffirming this observation with banks reserving seven times the amount for loan losses as a year ago, and companies like Delta, Southwest, United Airlines and Wells Fargo guiding to thousands of layoffs coming this fall. Challenger-Gray is your go-to resource to follow the now 1.4 million job cuts announced in the last 90 days that have yet to appear in the BLS jobs reports as those entities are yet eligible to be classified as unemployed.  More monetary and fiscal support from Congress prior to the November 2020 elections will mask the reality and severity of this COVID-19 recession, and it will be a post November election period when the supporting intervention (such as rent and mortgage loan forbearance) winds down that we see the other half of the “W” appear. Reflect on previous WINs – like the Look Under the Hood June 24, 2020, edition – and the totality of the ACRE COVID-19 coverage to draw your own conclusion.

Read commentary and analysis about COVID-19 and other topics on ACRE’s website.