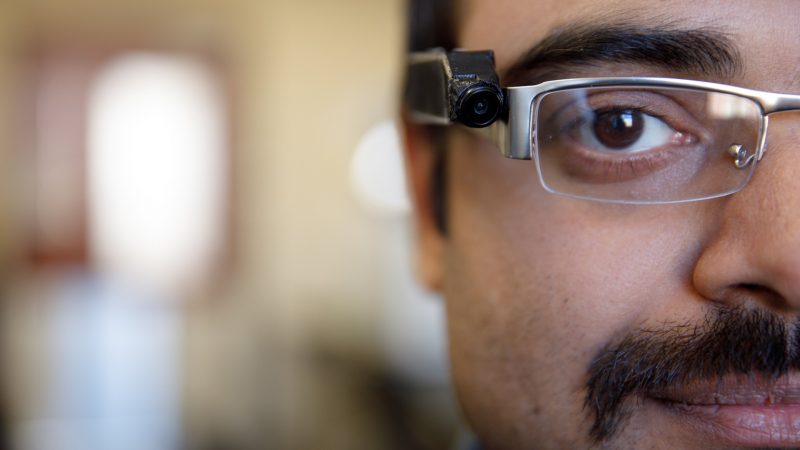 Psst! Hey, are you overweight? Touchy subject, I know, but it’s OK to admit. More than two-thirds of adults are said to be clinically overweight or obese.

The National Institutes of Health has awarded a consortium of university researchers, led by The University of Alabama, a $2.5 million grantto further evaluate a wearable device designed to change eating behaviors. Developed in a UA lab, the patent-pending system uses a tiny camera to photograph food and sensors that measure how quickly you eat it.

The grant, via the NIH’s National Institute of Diabetes and Digestive and Kidney Diseases, enables the researchers to test the device in a clinical trial over four years. An initial round of funding was awarded this fall.

“Changing eating behavior enough to achieve and maintain long-term weight loss is elusive,” said Dr. Edward Sazonov, a UA professor of electrical and computer engineering who is leading the project. “We’re seeking to determine if a device that adapts to your individual eating habits can change that.”

The high-tech effort, which involves researchers at the Brown University, Boston University, and the University of Colorado, Anschutz Medical Campus, centers on the ingenious development within Sazonov’s UA campus lab of a device he calls the Automatic Ingestion Monitor, or AIM.

Clipped to prescription or nonprescription eyeglasses, the AIM includes a tiny, high-definition still camera aligned with the wearer’s gaze. Sensors that accurately detect food intake trigger the camera to record what was eaten and to measure when, how much and how fast the wearer eats.

“The hope is that this technology will give people a new, less burdensome way to monitor and take control of their eating,” said Dr. Graham Thomas, a behavioral scientist who serves as associate professor of psychiatry and human behavior at Brown University and is a co-principal investigator on the research project.

While measuring food intake, which previous studies show the technology can do accurately, is important, Sazonov said that’s only part of the story.

“The way you eat is as important as what you eat,” Sazonov said. “We are also looking at the rates of ingestion. We want to slow down and be more mindful about our eating.

During the clinical trial, the device’s built-in computer will communicate with the wearer’s smartphone and, when necessary, trigger the phone to send carefully designed messages suggesting modifications to the wearer’s eating behaviors.

Work by other researchers has shown that tracking what you eat by hand is one of the most powerful strategies for weight control, but it can be burdensome, tedious and error prone. Electronic fitness trackers have proven popular, so for those open to wearing a high-tech method to help in modifying their behaviors, the device could prove effective.

“The key to this particular technology is to learn individual eating behaviors and then attempt to provide personalized feedback to modify those behaviors,” Sazonov said.

Additional researchers on the project include two nutritionists, Drs. Megan McCrory, of Boston University, and Janine Higgins, of University of Colorado; and UA’s Chris Crawford and Jason Parton.