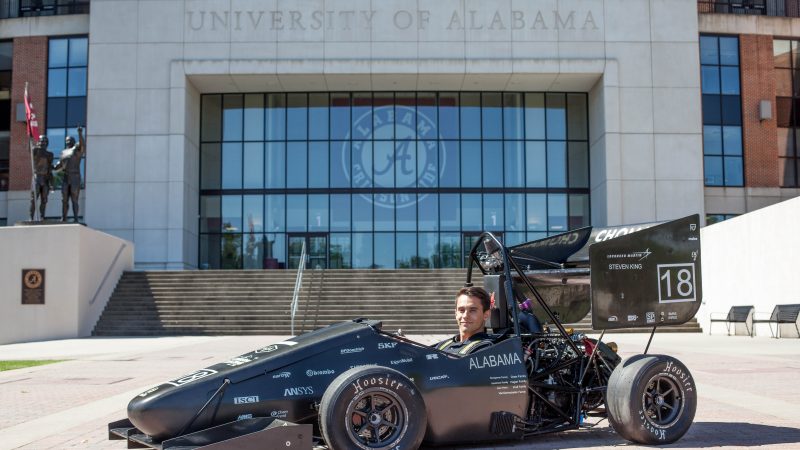 Jonathan Oakley Prell is sitting at his desk, reading over feedback comments on his team’s final performance at the Formula SAE series competitions where, this past May, they placed 10th overall out of 120 international teams. Prell, a junior in the STEM Path to MBA program, which is offered through the Manderson Graduate School of Business in The University of Alabama’s Culverhouse College of Business, serves as team manager for Crimson Racing, a competitive automotive student design team that attends the Formula SAE Michigan competition every year.

The almost 40-person team is made up of a diverse group of students from different colleges throughout UA, including the Culverhouse College of Business. As a unit, the team is tasked with conceiving, designing, building and racing a formula-racing style vehicle.

“It’s amazing to see how everyone works together.” Prell said. “Last year, we had a chief engineer and, essentially, he created the car to perform while I just made sure that him and his team had all the resources they needed to succeed.”

During his duties of managing the team, Prell found himself gaining hands on experience with both the engineering and business aspects of the project. For example, throughout the year he worked alongside engineers, who prepared the car to race, while also preparing the business pitch presentation for competition.

“[The judges] wanted us to see the big picture,” Prell explained. “What’s the whole reason for doing this car if you can’t profit from it? And with the business background I received from Culverhouse, I was able to piece together the pitch and prepare for the scenario we were given.”

At the business competition, Crimson Racing placed 7th out of 120 international teams. Overall, that led them to a 10th place finish, among the top five American teams and first in the Southeastern Conference. Over the past four years, Crimson Racing has improved from 98th place among the rankings to the top 10 at the competition and Prell hopes to continue playing a part in improving the team’s rankings.

“I wanted to set myself up to do what I wanted to do and be successful at it. That is why I chose the STEM Path to MBA programand what it’s done for me already,” Prell said after the competition.

“I took this route, because I knew the business classes would allow me to have the general business principles needed to succeed in the business world.” Prell continued. “This knowledge, and my technical background, will allow me to make and support business positions throughout my career.”

Prell is currently a manufacturing intern at Altec Industries in Birmingham, Alabama as part of the Engineering Cooperative Education program. He will continue as Crimson Racing’s team manager into next year.

More information on Crimson Racing can be found here.