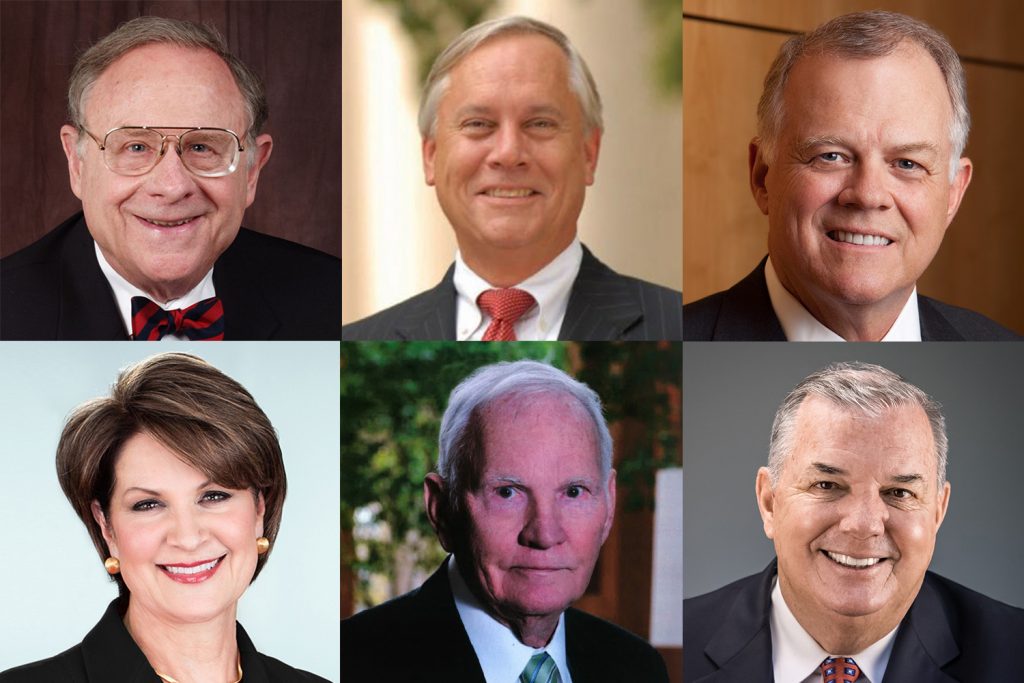 TUSCALOOSA, Ala. — The University of Alabama Culverhouse College of Business announced six business professionals for induction into the Alabama Business Hall of Fame.

The 2019 inductees will be honored in an evening celebration Thursday, Nov. 7, at Haven in downtown Birmingham.

Learn more about the Alabama Business Hall of Fame and purchase tickets to the upcoming induction ceremony at culverhouse.ua.edu/abhof.

Charles A. Collat Sr. is the retired president and CEO of Mayer Electric Supply and serves as chairman emeritus. As a result of Collat’s leadership and work ethic, Mayer has become one of the largest electrical distributors in the nation with more than 1,500 associates in 80-plus locations with annual sales exceeding $1 billion.

Collat is a committed supporter of The University of Alabama at Birmingham and is on UAB’s Leadership Cabinet and President’s Council. UAB’s business school was recently named the Collat School of Business thanks to a major gift from the Collat family. Furthermore, he has been recognized by UAB for his service to the institution with its President’s Award and was the recipient of an honorary doctorate of humanities.

He served in the United States Air Force during the Korean War and earned an accounting degree from the University of Georgia.

As chief financial officer and executive vice president of The Coca-Cola Co., Gary Fayard helped the company double its revenues to more than $47 billion. Retiring in 2014 after 20 years of service, with 15 years in the CFO role, one of Fayard’s greatest accomplishments was leading the acquisition of Coca-Cola’s North American bottling and distribution business in 2010 for $12 billion. Upon retirement, he established Stonewall Ridge Farm, a registered black Angus seedstock operation in Tennessee.

He serves on the board of directors of Genuine Parts Co. and Monster Energy Corp. He is the past president of the Atlanta Area Council of the Boy Scouts of America and served on the board of the Atlanta Symphony Orchestra. Through Fayard’s  involvement with The Coca-Cola Foundation, UA was the first public institution to receive Coca-Cola First Generation Scholarships. He is a member of The University of Alabama President’s Cabinet and is on the board of visitors for UA’s Culverhouse College of Business.

Fayard attended The University of Alabama where he earned a bachelor’s degree in accounting.

Joe W. Forehand Jr. is the former chairman and chief executive officer of Accenture, retiring in 2006 after a tenure highlighted by significant growth and strategic changes for the consulting firm. In 2000, he finalized Accenture’s split from Andersen Worldwide and successfully led its international rebranding campaign. The next year he led Accenture through its initial public offering. While Forehand served as CEO, the firm’s revenue grew from $9.6 billion to $13.7 billion, and it added nearly 40,000 employees to its workforce. After retiring, Forehand served as a senior advisor on technology buyouts with global private equity firm Kohlberg, Kravis and Roberts, also known as KKR.

Forehand is devoted to Auburn University, his alma mater. He served on the Auburn University Foundation’s board of directors and investment committee and was co-chair of its recent $1.2 billion capital campaign.

Marillyn A. Hewson is chairman, president and CEO of Lockheed Martin Corp. Hewson joined Lockheed Martin more than 35 years ago as an industrial engineer. During her career, she has held several increasingly responsible executive and operational leadership positions. In 2019, TIME magazine identified Hewson as one of the “100 Most Influential People in the World.” She was named the “2018 CEO of the Year” by Chief Executive magazine.

Hewson earned her bachelor’s degree in business administration and her Master of Arts degree in economics from The University of Alabama.

Lonnie S. McMillian was a visionary serial entrepreneur who led the development of innovative companies aligned with telecommunications and biotech. His interest in tech was sparked while studying radar technology as a member of the United States Marine Corps during the Korean War. After completing his service and graduating from college, he embarked on a wide-ranging career that included co-founding a computer manufacturer, Systems Engineering Labs, and joining SCI in Huntsville as chief engineer.

In 1985, he co-founded ADTRAN, a telecommunications firm, which remains as one of Huntsville’s largest non-public employers. A retirement in 2001 was shortlived: in 2005, he co-founded the HudsonAlpha Institute for Biotechnology, a non-profit institute, to bring together experts in genetics, education and entrepreneurship to accelerate innovation in the field.

McMillian graduated from Georgia Tech with a bachelor’s degree in electrical engineering. He graduated from Presbyterian College with a Bachelor of Science in business before serving his country in the Marine Corps. He passed away Dec. 30, 2018.

Michael Reilly retired from Randall-Reilly, formerly Randall Publishing Co., in 2015 after 40 years with the company. Under his leadership, the company transitioned from a 40-employee magazine publisher to a strategic data, media and marketing services company, employing more than 600 associates at its offices in Tuscaloosa and elsewhere across the country. He joined the company while a student at The University of Alabama and spent the bulk of his career there. He was named president and CEO in 2002. He is chairman emeritus of the company.

Reilly is heavily dedicated to the community. He has served on the boards of the Boy Scouts Executive Board of West Alabama, YMCA, Boys & Girls Club of West Alabama, and the United Way of West Alabama, and he has made significant contributions of his talents, time and resources to many other area organizations. He is a member of The University of Alabama President’s Cabinet and an active member of St. Francis Catholic Church.

He earned a Bachelor of Science degree from The University of Alabama.

The Alabama Business Hall of Fame was founded in 1973 by the Culverhouse College of Business Board of Visitors to honor individuals in business who have brought lasting fame to the state of Alabama. A 14-member board of directors establishes the criteria for nominations and governs the Hall of Fame. All candidates must meet the qualifications of being retired for a minimum of three years or be 65 or older, prior to induction, if still active in their careers.

For more information about the Alabama Business Hall of Fame and 2019 Induction Ceremony, including details on purchasing tickets, visit culverhouse.ua.edu/abhof.

Contact Zach Thomas, the Alabama Business Hall of Fame Director of Marketing and Communications, at zthomas@culverhouse.ua.edu or 205-348-8318.

Media can download headshots of the 2019 ABHOF Inductees here: http://tiny.cc/88om9y