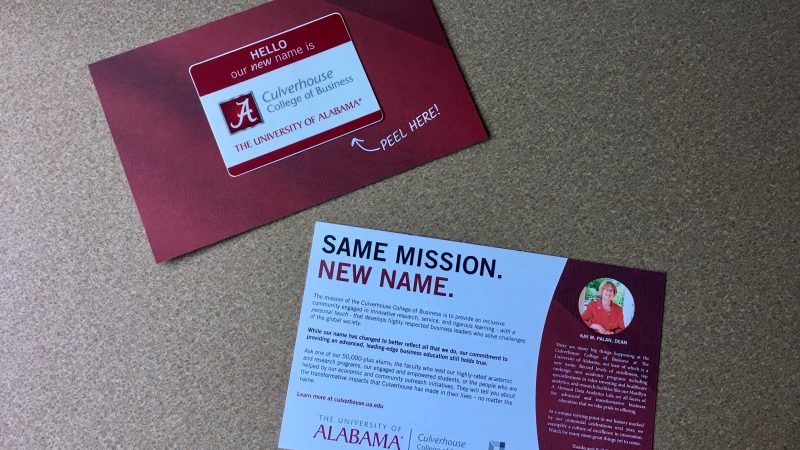 TUSCALOOSA, Ala. — The Culverhouse College of Business at The University of Alabama recently took home top professional awards from both the American Advertising Federation-Tuscaloosa at its 50th American Advertising Awards gala and the Council for Advancement and Support of Education at its District III conference in Atlanta.

The AAFT awarded a gold prize to the Culverhouse Hewson Hall Case Statement for the “publication cover” category and a silver prize for “magazine design.”

The University of Alabama as a whole collected 19 awards from the AAFT. See the complete list here.

At the Case District III annual conference last month in Atlanta, Culverhouse received an Award of Excellence for its Culverhouse College of Business Name Change Campaign in the “branding/identity program or campaign” category.

The Culverhouse College of Business implemented the name change through the late spring and early summer of 2018 to coincide with the conclusion of UA’s academic year. All academic and research units included the new logo and name on digital platforms, print collateral, and other marketing pieces.

The methodology used was as follows:

The process was initiated by college leadership as part of an effort to better articulate the outreach and research work that the college was doing that lay outside what could be connotated by the “commerce.” Culverhouse marketing and communications team met regularly with college leadership to craft the strategy for the new name implementation.

The targeted timeline for deployment of the name change messaging was over the summer of 2018 before the start of the school year. The process was accelerated thanks to final approval by the University of Alabama system trustees earlier than expected.

The plan to communicate the name change included the following:

The team that developed the campaign included the following people from the Culverhouse College of Business:

For more info, see the press release related to the name change.