$5,000 for Manderson Team at the Katz Invitational Case Competition

$5,000 for Manderson Team at the Katz Invitational Case Competition 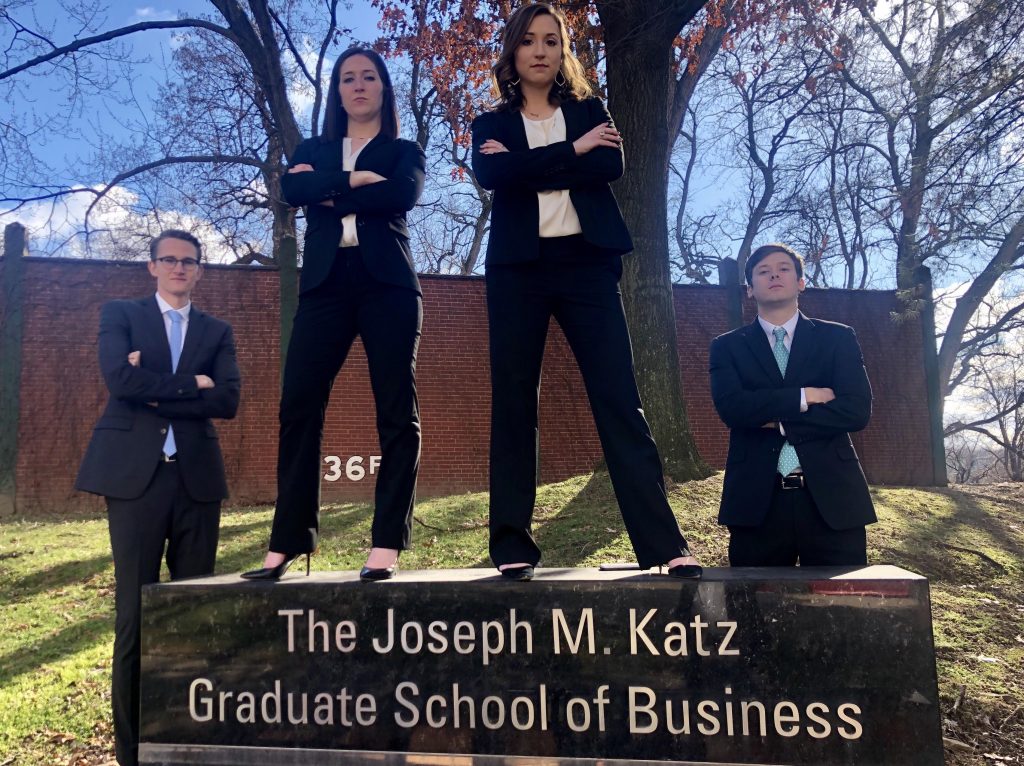 Above, from left to right, Manderson MBA students James McCool, Esther Workman, Lacey Cencula, and Justin Chambers strike a pose of intimidation ahead of the Katz Invitational Case Competition.

Congratulations are in order to members of a Manderson Graduate School of Business MBA case team. Assembled from Manderson’s case team roster, the team took multiple awards home to Tuscaloosa from the recent Katz Invitational Case Competition at the University of Pittsburgh, Feb. 8-9.

Competing against 11 teams from the country’s top business schools, the team placed second and received $5,000 in scholarships. Additionally, the team won the Best School Spirit award.

The team was represented by Lacey Cencula of Birmingham, James McCool of Mountain Brook, Esther Workman of Montgomery, and Justin Chambers of Memphis. Workman was also awarded Best Presenter.

“It was an honor to represent Manderson and the University of Alabama in Pittsburgh. Participating in the Katz Invitational Case Competition was a wonderful learning opportunity and chance to solve a real world business question. We were able to draw on each team member’s strengths to create a strategic and comprehensive recommendation,” said Workman. “Winning second place, Most Spirited and Best Presenter are incredible accomplishments after competing in the competition for only the second time ever.”

This year’s invitational was the seventh annual case competition hosted by the University of Pittsburgh’s Joseph M. Katz Graduate School of Business in partnership with Crane Co. Each year, the competition offers a challenging, multifaceted business case that is based on a strategic challenge faced by the sponsoring company. The case tests teams’ ability to analyze the situation and provide recommendations. The participating teams were given the case just two weeks prior to the competition.

“With only two weeks to create a strategic recommendation for Crane Co, a Fortune 500 Company, our team began working the minute we received the case prompt. We knew we were up against some of the most competitive MBA Programs in the country including Rutgers, Baylor, Florida and LSU. This fueled our motivation to produce the best pitch we could. Although it was a bumpy ride, we all agreed that we created a final product together that was far superior than any of us could create individually,” said James McCool.

“In just two weeks, the team completed an extensive research phase, developed a winning thesis, built a beautiful slide deck and wowed judges in both the preliminary and final rounds,” said Quoc Hoang, the team’s coach. “While the awards and prizes are impressive, I’m most proud of how the team came together. I had the privilege of spending a lot of time with these students who worked hard, felt highs and lows throughout the case period, and tasted success this past weekend with this great result.”

For more info about the MBA case team, contact Quoc Hoang at qhoang@culverhouse.ua.edu or visit the Manderson MBA website here.