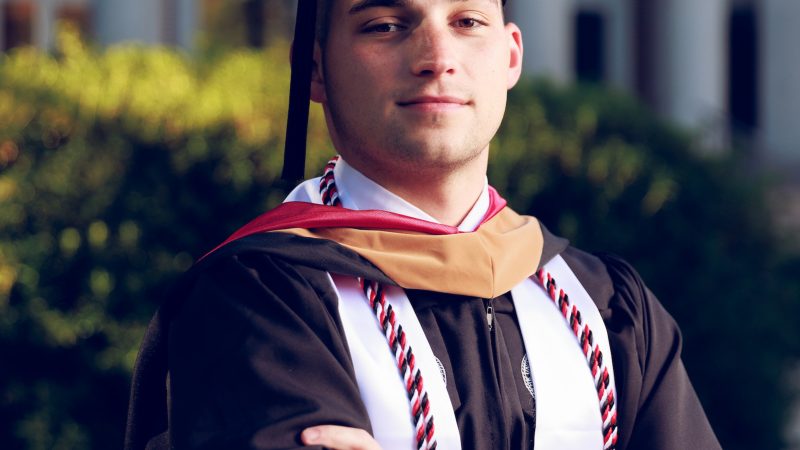 From being a first-generation college graduate to earning his master’s degree while helping kickstart UA’s TikTok presence, Derek Edwards is on the fast track to success.

The Huntsville native grew up being a proud Crimson Tide fan but didn’t know Tuscaloosa would become his new home until he took his official campus tour. He then knew instantly this would be where he would spend his next four years – and, it turns out, beyond.

While Edwards is ready to take on whatever comes after graduation, his initial plan for his collegiate life was very different. While finishing his bachelor’s degree in marketing in spring 2021, he was nudged to take the GRE and see if graduate school could be an option. After passing, he realized that a master’s program didn’t seem so out of reach after all.

“I studied under some of the grad school professors in my undergrad and to have the opportunity to connect with them further and with some of the higher-ranking faculty in the business school has been great,” he said. “I’ve enjoyed my 10 classes in grad school immensely.”

“The opportunity to have even the slightest influence on the future of the Capstone seems unreal to me after I spent so many years admiring and loving UA from afar.”

One thing that shaped Edwards’ time at the Capstone has been working as a member of the University’s social media team in the Division of Strategic Communications.

Edwards applied for the full-time position after graduating with his bachelor’s and has been working for the department ever since. He brings his student experience and love for UA into creating content for UA’s institutional and undergraduate admissions social media accounts. Working with the entire social media team, Edwards also helped launch UA’s TikTok presence.

“TikTok was on the radar, and we had talked about if we were going to start it, were we not going to start it, trying to fledge out strategies and if it would even work. Then we decided to soft launch it on the first day of school in 2021 and it just took off from there.”

With Edwards’ marketing-based mindset and experience working with undergraduate admissions, these experiences have helped him be able to think outside the box while working with Strategic Communications in reaching a new generation of students.

“It’s really impactful for that demographic of prospective students that we want to come to The University of Alabama, and I think it positions us well in a very competitive playing field with all the other institutions that people can go to,” said Edwards.

“You have all the other platforms hit your demographics; your alums, your parents, your students, but having a platform that’s so student focused and really that teenage- to college-aged student where you are getting prospective students – that’s ultimately the goal.”

Working with the social media team to reach the next generation of UA students through TikTok is especially meaningful to Edwards because of the impact that the Capstone has made on his life.

“The opportunity to work at UA is the biggest blessing to me. The University has given me more than I could have ever imagined when I first enrolled and stepped foot on campus in 2017,” said Edwards. “The opportunity to have even the slightest influence on the future of the Capstone seems unreal to me after I spent so many years admiring and loving UA from afar. It is incredible to get to help recruit the next wave of legends in the making.”

Originally published in The University of Alabama newsroom