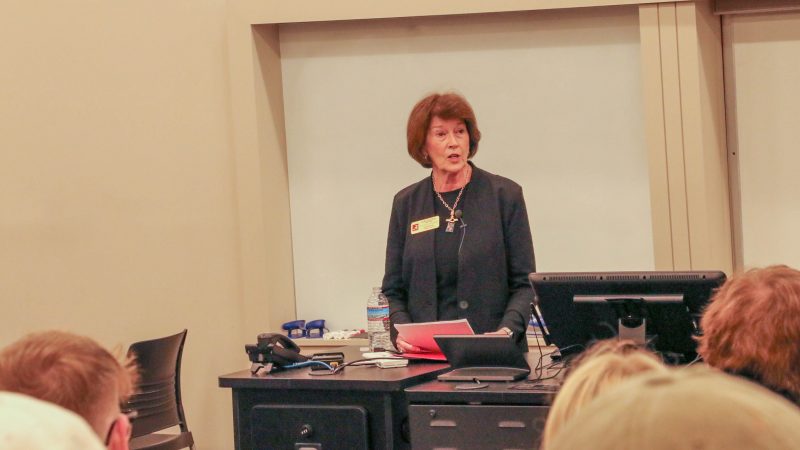 The stereotype of accountants might not be that they are big risk-takers, professionally speaking. Alma Gates Scroggins defied that stereotype when she went to work for Turner Broadcasting System a year after graduating in 1969 from Culverhouse with a degree in accounting. At that time, TBS constituted only 300 employees, one TV station, five radio stations, and outdoor advertising.

But TBS founder Ted Turner’s vision was much larger than the bounds of a regional media enterprise.

On June 1, 1980, Turner launched CNN and changed the landscape of broadcast journalism forever. And Scroggins did not just go along for the ride — she directed the company’s operations at a pivotal time that has helped it become the force it is today.

A native of Greensboro, Ala., member of the College’s Board of Visitors, and 2015 inductee into the Alabama Business Hall of Fame, Scroggins outlined that journey through the company to Culverhouse School of Accountancy students as part of the biennial J. Barry Mason Endowed Distinguished Alumni Award Lecture on Wednesday, October 19, 2022.

She is the second recipient of the award, which was made possible by a gift from Dr. Gail and Ralph Cassell, and named in honor of Culverhouse’s seventh and longest-serving dean. The award recognizes a distinguished graduate of the College who has demonstrated outstanding achievement after graduating from the Capstone and is invited to lecture to Culverhouse students as part of the award process. Former Dean Mason was also an attendee of the lecture.

When CNN went live, naysayers doubted the sustainability — in both reportage and financial terms — of a 24-hour news network. The reportage side of things was figured out quickly — Scroggins explained that CNN was adept at establishing relationships with news affiliates across the world who would be among the first responders to an emerging crisis.

The financial side of things? Well, that took some work.

In late 1981, CNN was facing costs far beyond original projections and Scroggins was called in from the Turner side to right the ship and was named vice president of CNN Financial Administration. She worked with the journalism side of operations to contain costs and led the network to profitability by 1985. Promoted to CFO and senior vice president, Scroggins was the first female member of the CNN executive team. She served 30 years, retiring in 2000 as executive vice president of the CNN News Group.

“News was the star; the stars weren’t the news,” said Scroggins in her talk about the underlying philosophy governing CNN. With fewer than 2 million subscribers at launch, but 6.5 million by year’s end, that philosophy was a model for success. However, the company grew with the times and now encompasses a massive empire distributed across all channels.

Scroggins’ presentation was interlaced advice for students and anecdotes and insights about Ted Turner. She said the world’s people could be divided into three camps: those who make things happen, those who watch things happen, and those who wonder what happened. And Turner was in the first camp, an innovator and pioneer.

Scroggins closed her presentation expressing her admiration of — and gratitude to – Culverhouse for instilling the values of altruism and giving back among its students.