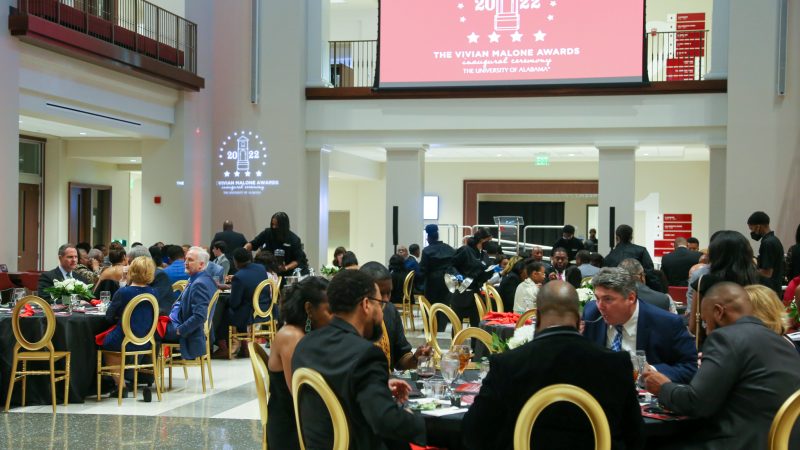 The Culverhouse College of Business hosted the inaugural Vivian Malone Alumni Awards in conjunction with The University of Alabama’s Black Alumni Association on April 9. The ceremony, named after Vivian Malone Jones, the first Black graduate of UA, recognizes her trailblazing impact on the University and its students for generations to come.

Over 150 guests gathered to celebrate the successes of notable UA students and alumni through the presentation of five awards.

“It was gratifying to see the incredible response to the award’s ceremony in person and on social media,” said Dr. James King, the associate dean for diversity, equity, and inclusion at UA’s Culverhouse College of Business and one of the key organizers of the event.

“The awardees, the finalists, and the nominees were all so impressive. Their accomplishments reflect so positively on the University and the preparation they got here. We are proud of them and happy to be able to have this opportunity to put a spotlight on them.”

More about each of the recipients below:

Judge John H. England Jr. graduated from The University of Alabama School of Law after receiving his undergraduate degree in chemistry from Tuskegee University. He served as a military policeman for the U.S. Army for two years and began practicing law in Tuscaloosa in 1974. England was on the Tuscaloosa City Council for two terms starting in 1985 and was chairman of the finance and community development committee. From September 1999 to January 2001, England served as Associate Justice on the Alabama Supreme Court, and then he went on to serve as a judge in the 6th Circuit Court in Alabama. He retired in January 2021 after 28 years of practicing law and now serves on the University’s Board of Trustees. England has a UA residence hall named in his honor.

Kerry Goode is a UA graduate and played football for the Crimson Tide from 1983 to 1987 before getting drafted to the Tampa Bay Buccaneers in 1988. After two years of playing professional football (one year with the Buccaneers and one year for the Miami Dolphins), he retired from the field and began a new journey as a strength and conditioning coach. Goode was a coach for the New York Giants and the (previous) St. Louis Rams. Upon being diagnosed with ALS, he founded The Goode Foundation, which supports ALS research and provides essential support and resources for those affected by the illness.

Royce Dickerson is a graduate of Culverhouse’s business administration program and is currently pursuing his MBA at UA’s Manderson Graduate School of Business. In addition to serving as the president of the Graduate Student Association, Dickerson was a Capstone Man for the University and played a role in the White House Historical Association. Dickerson was also the recipient of the 2021 Alumni Student Award given by the UA National Alumni Association.

Akiesha Anderson is a graduate of The University of Alabama School of Law and served as the Alabama Appleseed Center for Law and Justice policy director. Anderson is the incoming Chief of Staff for the Alabama House of Representatives Democratic Caucus and practices various civil rights work for organizations such as the Southern Poverty Law Center, the National Center for Lesbian Rights, and the Human Rights Campaign. She remains connected to the University through her chair position with UA’s Blackburn Fellows Involvement Network.

Tracy Croom graduated from the College of Business in 1983 with her Bachelor of Science degree in international finance and law. She proceeded to serve the City of Tuscaloosa for 30 years and was the first minority female department head for the City. Croom is a certified public manager, government finance officer, and government accounting technician. In addition, Croom encourages the growth of younger generations through her supervision of the Junior Cosmos Study Club, a high school mentoring program. She has also been the recipient of the Trailblazer Award presented by the Chamber of Commerce of West Alabama’s Women in Business Council.

See the full program here and photos of the awards ceremony here.