A “Spot” for First-gen Students 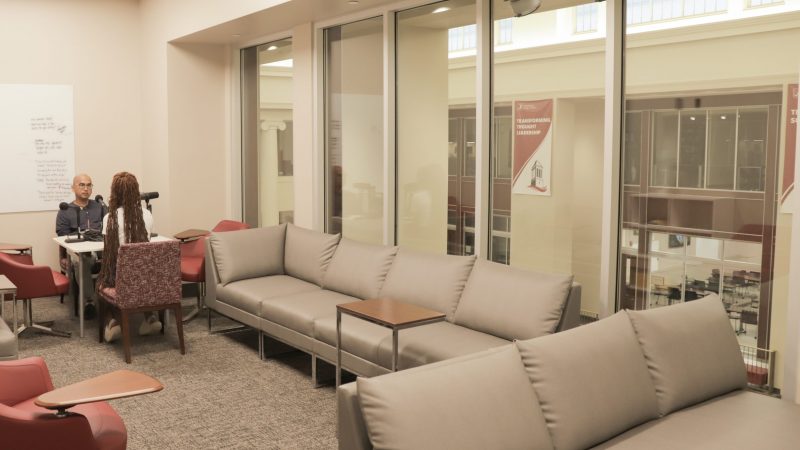 A “Spot” for First-gen Students

With the grand opening of The University of Alabama’s newest building on campus, Hewson Hall, came the unveiling of a new space on the third floor dedicated to first-generation students: The Walker and Bill Jones First Generation Spot. Made possible by a gift from Culverhouse alum Walker Jones and her husband Bill, The Spot provides first-generation students with a place to collaborate, connect, and create a community.

This space will serve as a hub for the growing number of first-generation students within Culverhouse to find support and resources during their time at the Capstone.

“I have been amazed at the great work UA has done with this incredible program benefitting first-generation students from across the state of Alabama,” W. Jones said.

“Bill and I support first-generation scholarship programs, because Bill was the first to go to college in his family. We know the benefits of a strong support program for these students,” W. Jones said.

“As we build stronger connections with first-gen programs and resources across UA and create greater visibility for the great work being done by Culverhouse faculty and staff, my hope is that more first-gen students will…experience the benefits of being part of a community that’s committed to their success,” Hoang said.

For first-generation students like Bran Apgwilym, identifying shared experiences with others has been quite impactful on their time at UA. Apgwilym, graduating in December with both his bachelor’s and master’s degrees in marketing through Culverhouse’s Accelerated Master’s Program, has learned that relationship-building is a continual process that requires considerable self-reflection.

His freshman year, Apgwilym felt immense pressure to fit in. Over the next few years, however, he learned the benefits of being his most authentic self.

An experience that paved this way of thinking for Apgwilym was participation in Legacy Scholars, a first-year experience for first-generation students at UA. He started in the program as a freshman and continued on to a mentorship role over the next few years.

Apgwilym hopes to return to UA and invest in the first-generation community after he graduates:

“[The first-generation community] has been an incredible part of my life, so I want to be able to give back to it in any way possible.”