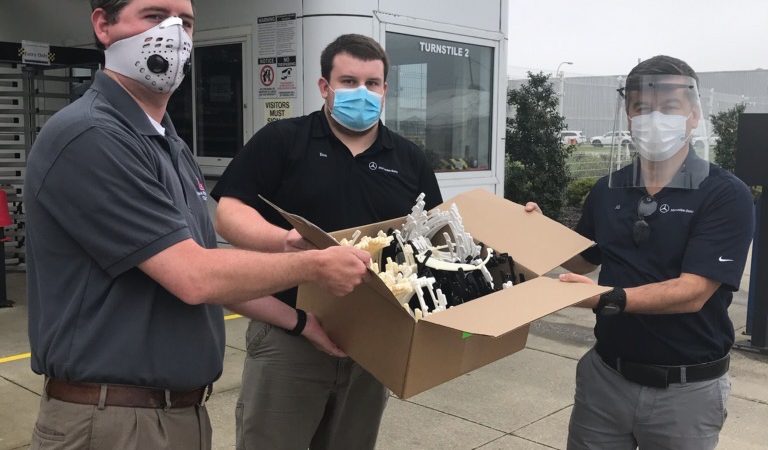 The effort to combat the COVID-19 pandemic has taken many forms at Culverhouse, with several groups collaborating in different ways to conduct research on the disease and provide resources for combating it or by directly helping front-line healthcare workers.

Culverhouse’s Alabama Productivity Center, or APC, an outreach unit focused on leveraging Culverhouse student and faculty talent and resources to help businesses throughout the state, took lead in an effort aligned to the latter. It did this initially by using its 3-D printers to produce face shields for healthcare workers at UAB in a partnership with Alabama Power and the UAB School of Engineering. Jody Beck, an innovation and productivity engineer at the APC, recruited his wife, Sadie, a Ph.D. student in mechanical engineering at The University of Alabama, to help churn out 3-D printed headbands on printers that they had moved to their home due to limited business operations at UA.

That effort, documented at length in this Made in Alabama article, showcases the collaborative spirit that had a direct effect on ensuring the safety of the state’s healthcare workers.

Since then, the face shield project has grown considerably. Mercedes-Benz U.S. International, otherwise known as MBUSI, which is located halfway between Tuscaloosa and Birmingham, got involved by calling to bear its 3-D printing and laser cutting resources. So did IPAK Alabama and ALG Graphics, both of which contributed cutting services.

As a result, the speed of production increased considerably, ensuring more face shields were getting to those who needed them most.

Alan Hill, the executive director of the APC, said that the genesis of the Mercedes Benz collaboration was borne from a long-term relationship with Bob Gambrell, Manager of Engineering – Mercedes Production System. “When we first started the project with Alabama Power, we knew it would take two to three hours per 3-D printer to print one headband.  This was our largest bottleneck at the time and the only way to increase it would be to add more 3-D printers to the process.”

“We knew from prior work with the Mercedes Production System department that they had several 3-D Printers, so we reached out to Bob to ask for his assistance.”

Soon after that conversation, other MBUSI resources were brought to bear to increase the number of headbands produced.

Hill has nothing but gratitude for all that MBUSI has done –– and continues to do.

“We greatly appreciate the contributions of Bob Gambrell and his team at MBUSI have had on this project. This goes to show how our state’s industry leaders are supporting our healthcare frontline workers.”