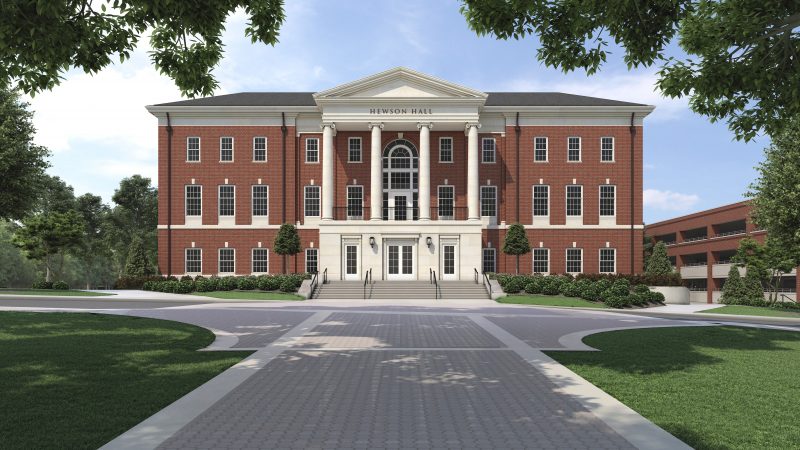 TUSCALOOSA, Ala. — Thanks to the generosity of a record-setting 63,277 donors, The University of Alabama raised $202.7 million during the recently concluded fiscal year, which ended Sept. 30.

“Our alumni and donors continue to steadfastly support and advance UA’s growth and impact as a national leader in higher education,” said UA President Stuart R. Bell. “We will continue to be good stewards of our resources by intentionally investing in our students and their educational opportunities at Alabama.”

Highlighting the successful 2018-19 fiscal year was the $30 million Hewson Hall Building Campaign benefiting the Culverhouse College of Business. Initially announced in September 2018, the campaign now has the entire $30 million committed for the project. Named in recognition of a $15 million gift from two alumni, Marillyn and James Hewson, Hewson Hall is projected to cost $60 million, with half of that funded by the University and the other half from charitable contributions.

“When we embarked upon the Hewson Hall campaign, there was no doubt in our minds that our base of alumni and friends of the College would see the positive impact that the building will have on our ability to teach students and foster college-wide collaboration,” said Dr. Kay M. Palan, dean of UA’s Culverhouse College of Business. “To see that we’ve easily met our fundraising goal by the fairly accelerated deadline is clear evidence that our network sees Hewson Hall as a component critical to the future growth of the College.”

Pending final approval from The University of Alabama Board of Trustees, Hewson Hall will be constructed across the street from Mary Hewell Alston Hall on the western edge of UA’s campus. It will be configured around a three-story atrium – a light-filled, dynamic space designed to connect faculty, staff, and students. Plans for the 108,000-square-foot building include 22 classrooms, 31 team collaboration rooms and several conference rooms and other gathering spaces.

The University will immediately put the project out on bid, and the Board of Trustees will tentatively consider bids at its February 2020 meeting. Hewson Hall is slated to open in August 2021.

“Thank you to everyone who contributed to the Hewson Hall Building Campaign, including the campaign cabinet, for their generosity to and enthusiasm for The University of Alabama,” said C.T. Fitzpatrick, chair of the campaign cabinet. “As a result of their efforts, we were able to complete a successful campaign in record time, which will expedite the impact this facility will have on students and faculty.”

The 2018-19 fiscal year was also boosted by significant gifts from the Holle Family Foundation, Alabama Power Foundation and Coca-Cola Foundation, as well as the successful completion of the Blackburn Institute Legacy Endowment Campaign.

— A $10 million gift commitment from the Holle Family Foundation, of Birmingham, will establish the Holle Center for Communication Arts, an interdisciplinary center in the College of Communication and Information Sciences. The generous gift, which represents the largest commitment to-date for C&IS, honors the life of Brig. Gen. Everett Hughes Holle and his dedication to his alma mater and the profound impact he made on the field of communication.

— A $1.4 million grant from the Alabama Power Foundation established the Alabama Power Endowed Innovation and Talent Retention Fund, which will develop and sustain resources dedicated to business innovation and entrepreneurship, creating a lasting positive economic impact on the state of Alabama and its citizens.

— The Blackburn Institute Legacy Endowment Campaign was established with the goal of raising $2.1 million to double the size of the Institute’s endowment in celebration of its 25th anniversary. Thanks to the work of the volunteer committee, the campaign exceeded its goal, raising more than $2.2 million, half of which will be dedicated to the creation of a Statewide Fellows Support Fund, ensuring the financial and human resources necessary for the next phase of growth.

The success of the fundraising year was also bolstered by giving to the Crimson Standard Capital Initiative to support enhancements to Crimson Tide Athletic facilities. In similar manner, the record number of donors was propelled by the success of the 2019 Bama Blitz online giving campaign, as well as We Are UA, the University’s new faculty and staff giving campaign. With a focus on increasing the number of UA faculty and staff that give back to the University, the campaign grew employee giving to UA from 19% to 29%, and it generated more than $1.75 million in gifts and commitments. The success of the fundraising effort was enhanced by a matching gift challenge from Bryant Bank, which provided over $47,000 to select funds that span the University.

“Our donors have once again responded to the call for philanthropic support of the Capstone in a tremendous way. With their support, the University is positioning itself for even greater success,” said Bob Pierce, vice president for advancement. “Hewson Hall is the crowning achievement of our fundraising year, and we look forward to that facility becoming a reality. In addition, we have now averaged more than $200 million in new gifts and pledges the last two years, and those commitments are making an impact across campus in the form of new and enhanced scholarships, new chairs and professorships supporting our world-class faculty and new facilities to improve the student experience. The University is excelling in so many ways under Dr. Bell’s leadership, and we are fortunate to have him at the Capstone.”