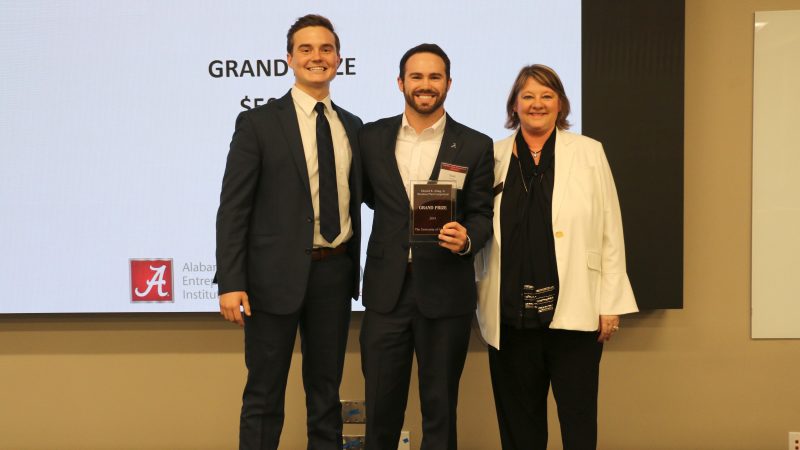 TUSCALOOSA, Ala.— Students representing majors across The University of Alabama campus pitched their business plans to judges in the Edward K. Aldag, Jr. Business Plan Competition on March 26 in the Bryant Conference Center.

The top ten teams competed for a Grand Prize of $50,000 and services as well as a working space at the new EDGE incubator and accelerator.

Photos of the winners can be downloaded here.

Started in 2014 by Edward K. Aldag, Jr., CEO and chairman of Medical Properties Trust Inc., the business plan competition cultivates entrepreneurship by allowing UA students to turn their business plans into reality through a daylong series of pitches to panels of judges. This year, 34 student teams competed.

The Alabama Entrepreneurship Institute, an outreach center in UA’s Culverhouse College of Business hosted the competition.

“Our theme for this year’s competition was: ‘Sometimes you win – Sometimes you learn,’” said Dr. Theresa M. Welbourne, executive director of the AEI and the EDGE. “Our goal is to help people start and grow businesses. Teams presented and received feedback on their ideas, watched their peers, and learned how to improve their own pitches. Many came in for workshops and coaching prior to the competition, and they made important connections and improved their ideas.”

Trips 4 Trade is a peer-to-peer based service that allows users to trade trips and experiences pertaining to outdoors, adventure, vacation, and sports. The members include: Slade Johnston, MBA student, from Butler, Alabama; Andrew Johnson, mechanical and aerospace engineering student, from La Grange, Kentucky.

Rottweiler Security aims to reduce theft and loss by providing customers with the ability to be alerted the second they leave their item behind or when a thief steals their item. Members include: John R. Zimmerman, chemical engineering major, from Lancaster, Pennsylvania.

Victory Garden Center is a community garden canter that will sell home gardening products and encourages residents to plant their own gardens. CEO: Leah M. Taylor.

KLG Creative Consulting is a creative firm specializing in everything from merchandise to digital content. CEO: LaShay Gray.