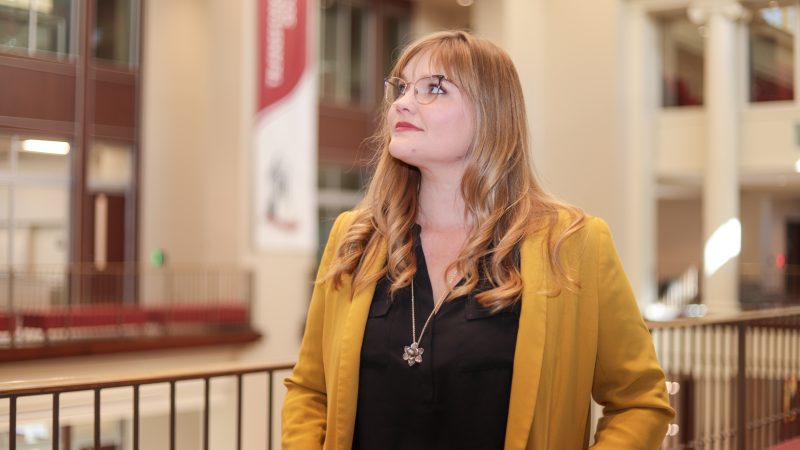 If you like to kayak, canoe, or spend time in the woods near Jasper, Alabama, you’ve probably seen evidence of Culverhouse MBA student Elyse Peters’ work. As the Assistant Vice President for Community Impact of the United Way of Central Alabama, she developed a 32-mile blueway (a water path or trail) along the Alabama Scenic River Trail, creating kayak and canoe access points, improving existing state-owned boat ramps, and managing over $100,000 in grants and municipal support. Peters also worked to build a state-of-the-art, accessible archery park in Walker County. These projects helped her see the value of public and private partnerships, “where you can take private philanthropy dollars and work with local municipalities and leaders to leverage the potential of the community to create something lasting,” she said.

After starting at The University of Alabama as a chemical engineering major like her father, Peters discovered New College her sophomore year, and graduated with a Bachelor’s in Interdisciplinary Studies with a concentration in Public Health & Civic Engagement in 2013. This prepared her for her involvement with AmeriCorps VISTA, and later the United Way, where she began laboring to address public health problems like food insecurity and the opioid crisis.

Working for the United Way was a “dream job,” but when Covid-19 hit, Peters saw it as an opportunity to pause and reflect. “What have I put on the back burner?” she asked herself, and the answer was an advanced degree in business from her alma mater. But when she started in the Masters of Management program at Culverhouse’s Manderson Graduate School of Business, she was unsettled—she knew she needed to pursue the MBA—so she changed course and enrolled instead in the MBA program at Manderson.

Peters continues to be drawn toward work with a strong social impact, which has led her to an interest in social entrepreneurship. She mentions Thistle Farms in Nashville as an example, which is a haven for women who have been victims of trafficking, prostitution, and addiction. The women can also work in a café and shop owned by the Farms, providing job skills and supplying a foundation for building an independent life.

Peters is drawn to these kinds of intersections. “Ideas that don’t fit normally together,” she says, “that’s where I want to be.”