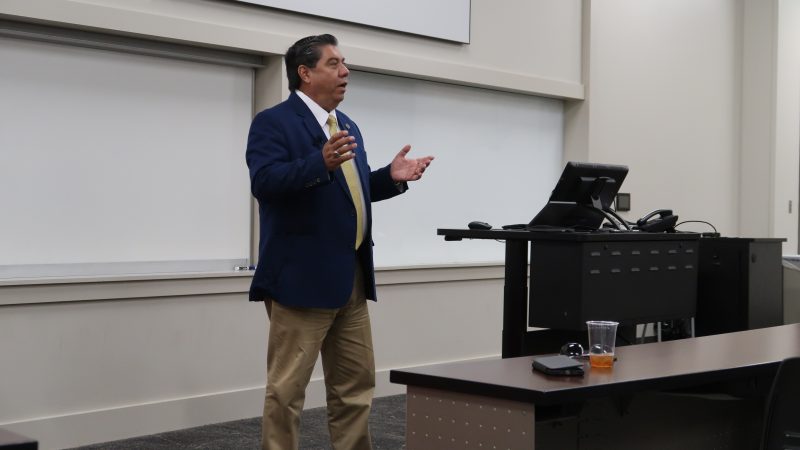 The Culverhouse Office of Diversity, Equity, and Inclusion hosted Hispanic entrepreneur and business leader Hernan Prado on September the 28th, as a featured speaker in the Culverhouse DEI Speaker Series during Hispanic Heritage Month. Prado, who was born and spent his early life in Ecuador and moved to Alabama in 1995, spoke to a group of students, faculty, and staff about his experiences as a successful businessman of color in Alabama.

Prado recounted his experiences as an entrepreneurially-minded social worker in the mid-1990s, creating immersive ESL programs to enfranchise Hispanic kids, and later securing funding from NASA to extend the programs nationwide. The programs, Prado explained, stressed “belonging, identity, and ownership.”

After moving to Birmingham in 2003, he started KPI Latino, the first Hispanic-focused marketing agency in Alabama. Then, following the economic downturn in 2008, Prado started the media company Hola Latino. He is currently excited about launching a Hispanic Chamber of Commerce for Alabama in the first quarter of 2023.

Keeping one eye on the students, Prado provided a wealth of actionable advice during the talk and the question-and-answer session that followed. Sometimes his best business ideas come while in the shower, admitted Prado, likening a business idea to a “little seed.” The only way for the seed to grow is to talk about it with like-minded people. If it’s not a good idea, Prado said, it will die by itself.

On the subject of pitching ideas to backers, he said, “time is money. You have to consider your time an investment.” He counseled students to be punctual, and when pitching, to never ask for more than 30 minutes of a new prospect’s time. He also encouraged them to “work their way into the budget” by being visible, especially in key months in the fiscal year like September and October.

“In the world of business, you want to be a VIP,” Prado told the students. “If you become a successful producer, you will be a VIP, and there is no better treatment in the world.”